1. Evaluation of Incorporating Hybrid Vehicle Use of HOV Lanes

The objective of this study is to evaluate the impacts of allowing single-occupant hybrid vehicles into HOV lanes. In this study, a microscopic simulation method isintroduced to investigate California’s proposed hybrid-HOV policy. A microscopic simulation approach is appropriate since it is designed to model the movement and behavior of individual vehicles on urban and highway road networks. The study site is Orange County (OC) freeway network, which includes all the major freeways in Orange County except toll roads, such as I-5, I-405, SR-55, SR-22, SR-57, and SR-91.

As shown in the below figure, the network was built in the Paramics simulator based on aerial photos and geometric data from Caltrans, which is one of the largest micro-simulation models in the world. The zone structure of a simulation network was matched with the planning model and the network has 265 zones. It was then calibrated based on estimated demands, loop detector data and travel time data. Demand matrix was estimated using TransCAD and Paramics OD estimator and simultaneously hybrid demand was estimated using multinomial logit model. Ramp meters were added to all applicable on-ramps and set to the field metering rate, and loop detectors were placed to collect data across the network.

This study was supported by Transportation Department of California. 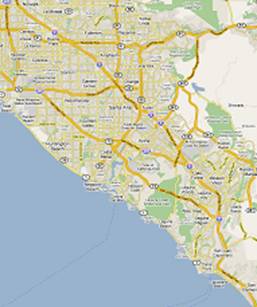